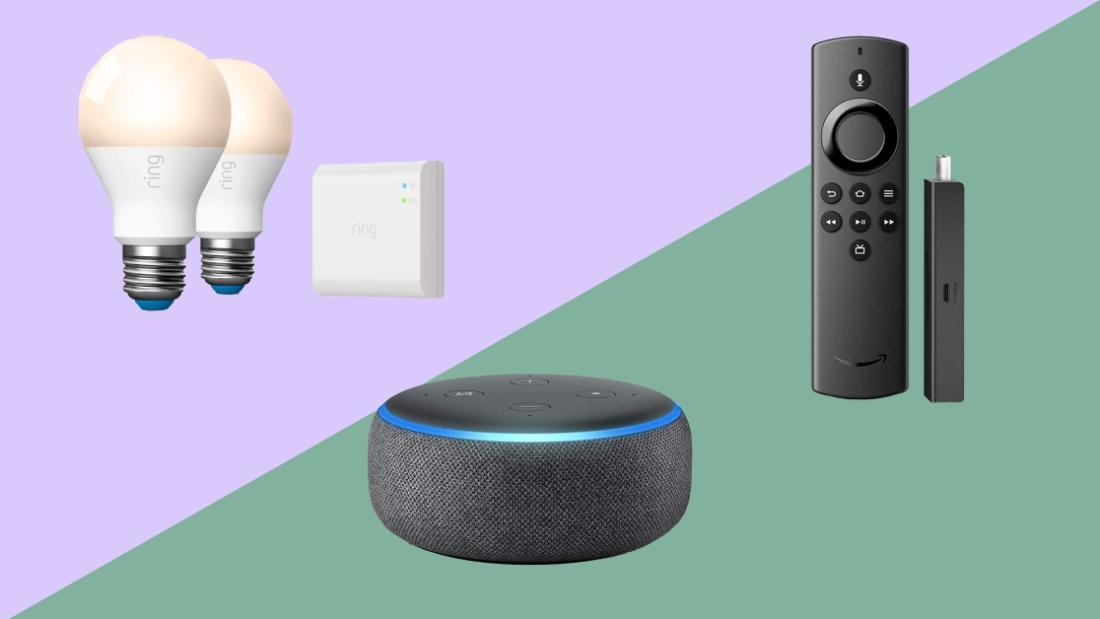 Black Friday is still a week out. But as we’ve seen year after year, deals start before anyone’s even begun cooking their Turkey.

And Amazon wasted no time this year, as we’re already seeing steep discounts on many smart home devices.

If you’ve been waiting for the new spherical Echos boasting better sound than previous generations to go on sale, it’s truly your lucky day. The full sized 4th Gen Echo and 4th Gen Echo Dot family — Dot, Dot with Clock and Dot Kids Edition — are all seeing discounts. And in fact, all of them are down to all-time-low prices:

Over in the smart screen department, all three Echo Shows are seeing discounts. The advantages here are HD displays, which let you video call, stream content from several services and get visuals along with Alexa’s audible answers:

The Echo Studio isn’t just the biggest Echo, but it packs a tremendous punch with a wide sound stage, booming bass and clarity with ever track. Right now, you can score it for 20% off at $159.99, down from its original $199.99 price tag.

Echo Buds bring solid sound and Alexa right to your ears. These are Amazon’s true wireless earbuds with active noise reduction and a wide soundstage. The Echo Buds are priced at $79.99, down from $129.99.

Last but not least is Amazon’s simplest smart device: the Echo Wall Clock, a clock with an array of LEDs to visually show timers and alarms. It, too, is on sale:

Ring, the maker of video doorbells, smart lighting and connected alarm systems has a slew of deals available to shop right now. As we’ve been spending more time at home this year, it might have you thinking about some upgrades you can make.

What better place to start then at your front door? Ring’s Video Doorbell 3, highlighted by 1080pHD video quality, night vision and pre-roll video is currently discounted, alongside the Video Doorbell Pro, which has to be hardwired, and the Peephole Cam, which replaces the non-smart peephole.

Amazon also has some great sales on Ring’s line of smart lighting. Ring’s A19 bulbs don’t support color, but you do get a basic white light that can get seriously brighten up a room at 800 lumens.

Our favorite feature is that they integrate with your other Ring devices. For instance, if you have one set up in the front hall it can be triggered by an outdoor camera to turn on. You can even set schedules for the A19 bulb. They’ll connect to your Wi-Fi and the larger Ring ecosystem via the Bridge as well.

Here are all the deals:

If you need larger bulbs for a bigger fixture, Ring also makes PAR38 bulbs with all the same smarts. A two-pack of PAR38 with the Bridge is just $48.99, down from $69.99 at Amazon.

If you’re looking for outdoor lights that can recharge themselves, Ring offers a plethora of lighting solutions with solar power rays built in, a few of which are currently discounted:

It’s important to remember that a single Ring Bridge can support a maximum of 50 lights. If you have more than 50, you’ll need another Bridge. Currently, they’re discounted to just $19.99, down from $49.99.

Last but not least, Ring Alarm is seeing discounts in nearly every configuration possible. Ring Alarm is a no-contract security system that you can really customize. There are base packs that include the panel and a bundle of sensors. The rest of the devices in the Ring Ecosystem — like the Video Doorbell, Cams and even lights — can be fully integrated into the Alarm system.

Here are the deals on Ring Alarm:

The new Eero 6 and Pro 6 mesh routers, alongside a few older iterations, are currently on sale:

The entry-level Fire TV Stick Lite is the cheapest way to add some smarts to your television. Amazon rolled out this entry-point earlier this fall and it’s now discounted to just $17.99, down from $29.99. It plugs directly into the HDMI port on the back of your TV and delivers content at full HD. Like the more expensive Fire TV sticks, this gives you access to thousands of streaming services with the tap of a button.

And those looking for a 4K streaming experience will want to opt for the Fire TV Stick 4K. It adds in a faster processor and turns the quality up to 4K resolution with support for HDR. It’s just $29.99, a discount of 40% from its usual $49.99 price tag.

The Fire TV Cube is Amazon’s flagship streaming box with hands-free Alexa built in. You can actually talk to the Cube like it’s an Echo Dot — allowing you to ask the assistant to turn on the TV, adjust the volume and even for specific content. It’s on sale for just $79.99, down from $119.99.

You can pair any of these Fire TV streaming devices with a Recast, which is ssentially a smart DVR with plenty of storage for storing local content. The 500GB Fire TV Recast is just $129.99, down from $229.99.

And if you’re looking for a simple smart TV, the 32” Fire TV Edition fits the bill at $119.99. With the brains of a Fire TV stick inside, you get instant access to thousands of streaming services like HBO Max, Netflix, Prime Video and countless others out of the box.

Amazon’s Fire Tablets offer a simple solution for light gaming, streaming tons of content and even browsing the web. Better yet, they run a customized version of Android dubbed Fire OS which gives you access to Amazon’s App Store. Alexa is also deeply integrated. With a constant power source, you can even use the Fire 7 or Fire HD 10 as an Echo Show like smart screen. The Kids Edition come with a durable cover, a terrific warranty and a special kids interface.

The entry-level Kindle, which features an approachable design with a 6-inch display and 8GB of internal storage to hold thousands of books, is down to just $59.99 from its usual $89.99 price tag.

Blink security cameras are also joining in on the discount party. Earlier this year, we reviewed the Blink Mini and found it to be both a dependable and affordable camera. Right now, it’s matching the previous all time low of just $24.99. That’s $10 off its regular $34.99 price — or you can score two of them for $49.98 (from $69.99).

In early September, Blink released the new Outdoor Camera, essentially the new entry-level square cameras that run off of AA batteries. The big feature? They provide 1080pHD video and won’t need the batteries swapped for two years. The Blink Outdoor is down to $64.99 (originally $99.99) and packs of two, three and five are all being discounted.

The vaccine, developed with the University of Oxford, showed 90% efficacy in one dosing regimen -- when the vaccine was given as a half...
Read more