The coronavirus exposed US reliance on India for generic drugs. That supply chain all hinges on China 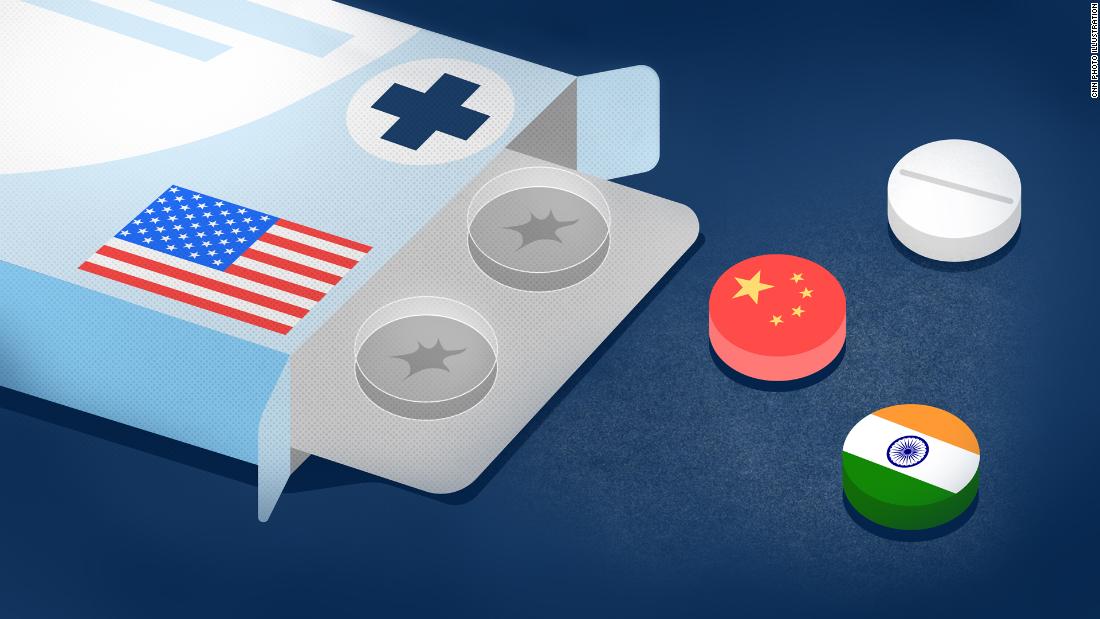 “When the hoarding started, my 30-day supply was in back order,” said Thebarge. “The scenario really scared me, what would happen to me if I couldn’t get HCQ?”

The US Food and Drug Administration (FDA) has not approved HCQ as the treatment for Covid-19, but the episode showed how dependent the US is on India for drugs — namely generic drugs, which are copies of brand-name pharmaceuticals that have the same effects but cost less.
In the US, 90% of all prescriptions are filled by generic drugs and, one in every three pills consumed is produced by an Indian generics manufacturer, according to an April 2020 study by the Confederation of Indian Industry (CII) and KPMG.

While the US seems to hold sway with its ally India in obtaining the finished product, there’s a bigger issue earlier in the supply chain.

India gets around 68% of its raw materials — known as active pharmaceutical ingredients (APIs) — from China. Any disruption in that supply chain can create a major problem, especially during a pandemic.

As scientists and pharmaceutical companies race to find an effective treatment and vaccine for Covid-19, there are fears the current vulnerabilities in the supply chain could expose the US — and other countries — to drug shortages, just when they need them most.

The US has pledged to “Buy American” drugs going forward, and Indian plans to ramp up its own API production, but will they be able to replace supplies from China during this pandemic — or even the next?

India’s rise as a global producer of cheap pharmaceuticals began when the Indira Gandhi administration passed the Patent Act of 1970, which granted legal protection only to the processes used to make a drug, not a drug’s content.

Indian companies excelled in reverse engineering big-name drugs and launched copycat versions — legally. But it wasn’t only India that wanted these products, and in the mid-1980s, regulatory changes opened up the US market more open to cheap copycat drugs, too.

Naturally, the pharmaceutical giants, which had invested millions of dollars in creating new drugs, pushed back, and in 1995 the World Trade Organization (WTO) introduced an agreement giving drug patents 20 years’ protection — and companies were given 10 years to comply.

But when the HIV/AIDs crisis hit durig that 10-year transition window, it was clear that poor countries needed cheap drugs — in 1999, the most common cause of death in sub-Saharan Africa, where many people couldn’t afford antiretrovirals, was HIV/AIDs.

The WTO conceded that member states could grant licenses to manufacturers to make generic versions of patented medicines needed to protect public health.

In 2001, an Indian pharmaceutical company, Chemical, Industrial and Pharmaceutical Laboratories (Cipla), reverse-engineered several brand-name drugs, and combined them in a revolutionary anti-HIV drug cocktail. African countries and aid groups were offered the drug for $1 a day, a discount of more than 96% on brand-name versions.

Now that company is working to reverse engineer three drugs being tested to fight Covid-19 — Remdesivir, Favipiravir and Baloxavir. “Twenty years later we are again in the forefront here in India with regards to medicines necessary to combat Covid-19,” said Dr Yusuf Hamied, chairman of Cipla.

Still, overcoming challenges from intellectual property rights is only half the story.

As the number of reported Covid-19 cases increased in China in January, the nation went into lockdown. Active pharmaceutical ingredient factories across the country closed, leaving Indian pharmaceutical companies struggling to get raw materials.

“(When) China shut down because of Covid-19, we got desperate,” said Vinay Pinto, executive director at Wallace Pharma, one of the country’s leading manufacturers of HCQ.

“We immediately had to scramble our purchase and supply chain teams to ensure we had adequate raw materials. We actively tried to source the stock held by local merchant traders. This was in smaller lots and much more expensive,” he said. Some Indian pharma companies even resorted to chartering private planes to airlift APIs from China.
In mid-March, China’s lockdown eased, but the global border closures due to the pandemic have now caused further logistical issues with shipment of all product exports.

“We are still facing a lot of difficulty in getting imports from China,” PC Mishra, director of India’s Directorate General of Foreign Trade said in late April. “If we compare March 2020 and 2019, imports from China are down by 40%.”

Jayasree Iyer, the executive director of Access to Medicine Foundation, a non-profit that analyzes pharmaceutical industries, says there is also a fear among pharma companies that they “may not have enough stocked-up APIs for their next set of commitments.”

India used to have a thriving bulk drug and API industry, but when import restrictions were lifted in the early 1990s, its generic drug manufacturers began getting raw materials from China, where some APIs can cost up to 30% less, according to the CII-KPMG report.

“Large incentives were given by the Chinese government to Chinese pharmaceutical companies to set up large API plants,” said Singh of ACG Worldwide. “Because of the sheer size and scale of these facilities they were able to leverage economies of scale to drive cost down.”

There are now more than 7,000 API manufacturers in China compared to around 1,500 plants in India, where big players like Sun Pharma and Cipla are a rarity, according to the CII-KPMG report.

This is not the first time India’s pharma sector has been affected by a slowdown in China.

During the Beijing Olympics in 2008, China shut down most API plants for almost three weeks to reduce air pollution levels and reach its “blue-sky goal,” pushing up the cost of some bulk drugs sourced solely from China.

After that, the Indian government explored the idea of building Mega Pharma Parks to produce APIs but the project was reportedly shelved due to a lack of financial assistance.

However, the most recent supply shortages have caused a rethink.

On March 21, the Indian government revived plans for Bulk Pharma Parks as part of a $1.3 billion package to boost domestic production of bulk drugs and exports.

“This is a much-needed step, but we will have to see how it’s implemented at state level. In the past we have faced immense challenges for environmental clearances or accessing finance,” said Dr Kamal Vashi, Vice President of Mangalam Drugs and Organics, one of India’s API manufacturing companies.

The United States, too, has recognized the need to become more self-sufficient.

“Never again should we have to depend on the rest of the world for our essential medicines and countermeasures,” said Peter Navarro, President Trump’s economic adviser, during a press briefing last month.

Speaking about Trump’s “Buy American” executive order, he said that after this pandemic, the American government would source essential medicines, medical supplies and equipment only from American companies.

The push to reduce the US’s reliance on other countries for drugs has gained bipartisan support.

One democratic congresswoman has set up a working group to find ways to bring drug manufacturing back to the US, and on March 19, a small number of Congress members introduced the Protecting Our Pharmaceutical Supply Chain from China Act, calling for the purchase of APIs and finished drugs from China to stop by 2023.
However, cutting direct imports from China won’t solve the issue of US reliance, as Rosemary Gibson, an author of several medical books and senior advisor at The Hastings Center bioethics research institute, warned six months ago in Washington DC.

“India is the source of 24.5% of generic drugs sold in the US,” she said. “This appears to suggest that we don’t need to worry about generics coming from China. In fact, India is dramatically dependent on China for raw materials and chemical intermediates that are used to make active pharmaceutical ingredients.”

In short, the US will only not be reliant on China if it cuts ties with India, too.

“They also ignore the strength of a robust and geographically diverse global supply chain,” she added.

Indian pharmaceutical companies say it will take time to build up their API production capacity — and reduce their reliance on China.

“Covid-19 has been an eye opener,” said Dinesh Dua, Chairman of Pharmaceuticals Export Promotion Council (Pharmexcil). “The government has done more in the past few weeks than what it has done in the past few years. But even if we start now, it will take us at least 10 years to end our dependency on China.”

Philippe Andre, who audits pharmaceutical companies’ manufacturing practices in China, endorses a more collaborative approach. “The solution would have to be international, through some sort of system where the producer countries would have to ensure they have sufficient capacity to continue supplying the world during a crisis,” he said.

Iran suffers more humiliation with killing of nuclear chief. But no one in the region wants war

Iran suffers more humiliation with killing of nuclear chief. But no one in the region wants war Source link
Read more
News

"This evening, Governor Polis and First Gentleman (Marlon) Reis learned that they have tested positive for COVID-19," the statement reads. Both are feeling well...
Read more
News

Iran suffers more humiliation with killing of nuclear chief. But no one in the region wants war

Iran suffers more humiliation with killing of nuclear chief. But no one in the region wants war Source link
Read more

"This evening, Governor Polis and First Gentleman (Marlon) Reis learned that they have tested positive for COVID-19," the statement reads. Both are feeling well...
Read more

Now 43, Kobayashi has written books on her mental health struggles and has a steady job at an NGO. But the coronavirus is bringing...
Read more
Load more

Iran suffers more humiliation with killing of nuclear chief. But no...